Agua Fria’s JV wrestling team recently had team matches on January 10, 2017, held at their school in the Old Gym. They went against Kellis, Verrado and Buckeye. During their first matches against Kellis the score was 42 for home (Agua Fria) and 36 for guest (Kellis). Their second match against Verrado came out to be 27 for home and 21 for guest (Verrado). The third set and last matches scored 27 for home and 39 for uest (Buckeye).

During their second set of matches, Gavin Davis, a student from Verrad 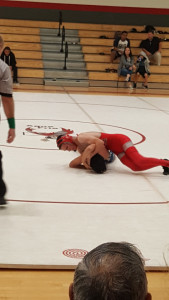 o, popped his knee in a match between him and one of our students.

“I was in front of him with my legs behind his. When he went to throw me my knee popped,” Davis said. “It wasn’t his fault, things like this happen in the sports world. I don’t blame anyone.”

He was rushed off the mat and onto the bleachers. He was then seated next to the medic and his mother. They then proceeded to put an ice pack on his knee and wrapped it in saran wrap. They planned to wait until it was
numb and re evaluate the injury later. The injury could hinder his ability to compete for feature matches.“Depending on the how bad it is I could be back next week or next year,” he said.