The Varsity Owls men’s basketball team is back in tonight on the road against Barry Goldwater. The Owls are looking to extend their 8-game winning streak. In the previous meeting between the two teams, AFHS defeated the Bulldogs 75-57.

Here’s a recap of some previous men’s basketball games from the month of January. 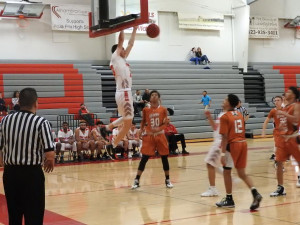 On Friday January 13, the varsity basketball team played their long-time rivals, the Desert Edge Scorpions. They won 76-52. With every quarter, the Owls gained a greater lead and Desert Edge´s chances of winning diminished.The crowd has cheering and screaming the whole time and the Desert Edge fans did not say anything except probably saying “When will this game end?”

The key to Varsity’s win on friday was the ball movement and putting pressure on Desert Edge’s offense. Varsity got an easy win against Desert Edge, with every Varsity player getting to play.

They also played Verrado on Tuesday, which was more exciting than Desert Edge. The game was close with neither team allowing a lot of scoring. The score after each quarter was: 1st quarter 10-8, 2nd quarter 21-20, 3rd quarter 47-39 and the final score being 59-52, with varsity winning their 2nd game in a row.

The key reason they won this game was the same as Desert Edge but this time they actually had competition that could keep up with them. The leading scorers were Daniel Foster with 19 points and Bryce Fowler with 17 points.

JV played before Varsity on Friday and they did not have the same outcome as Varsity. They lost 42-51. The first quarter looked like the game was gonna be a blow out with JV scoring 19 points and only allowing 9 points. Then came mistakes which caused Desert Edge to comeback and win. This loss gave JV a five game losing streak.

“Two things: turnovers and giving up offensive rebounds,” said Coach Jovanelly when asked what caused the frustrating loss. “We also had a really poor second and third quarter. We only scored 4 points in third quarter.”

“I’m proud of their effort but I am starting to get tired of all the repetitive mistakes: turning the ball over and not getting offensive rebounds.”

They faced Verrado and ended their losing streak by winning 42-37. This game, JV improved. The reason why they won, according to Coach Jovanelly, was because “that was the most complete game we played.” Jovanelly also thought their team played better this time against Verrado because they did not turn the ball over as much and also they had some new players that were available this time against Verrado.

The Freshmen played like Varsity; they beat Desert Edge 58-48. They took the lead early in the first quarter 19-12 and expanded that lead every quarter: second quarter 37-24, third quarter 48-36, and finished the game 58-48.

“We out hustled them, caused the turnovers, and we pressed most of the game,” said Coach Upsher. “So if you can rattle a team to give you turnovers then you can make easy baskets, it makes it an easy win.”

“We were lazy so we got to keep the intensity up a little bit better,” Coach Upsher said about improving for their next game against Verrado. “We need to shoot more. We didn’t shoot well so over the weekend I told the guys to get into the gym.”

Coach Upsher mentioned that he was proud of his team in the end. “I was proud of them, the defense was good and they got a little lazy there a little bit but you take the “W” no matter what,” he said.

Freshmen were the only team to lose to Verrado. They lost 40-51 this time against Verrado but last time they won by 2 points. Coach Upsher said they lost because: “They got out hustled. I don’t think we played better, I think we just had some things fall our way but tonight it did not happen.”

But the main reason, Upsher said, “was because they didn’t play as a team. Watching them play tonight, they played like five individual players on the court.¨