The Agua Fria varsity baseball team returned to the Field for a scrimmage against Cesar Chavez on Feb. 17. Even though it was a preseason game the boys went out on the field 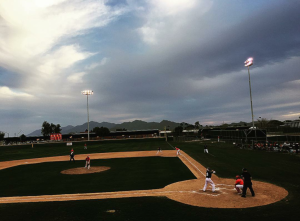 prepared for a victory in which they received.

The Varsity boys won with a score of 8-5. It was a close game but the boys put in work in defense and offense, although, according to Jose Urbina who is a player on varsity who pitched the scrimmage against Cesar Chavez, “We did win but we still have a lot to work on before our first game.”

The game was very well played and Cesar Chavez was great competition. They played a good game. Although it was just a scrimmage the boys got to take the field again and realize what they need to work on in order to have a good baseball season. Play hard, expect to win!