By: Alysa Marquez and Carter Weeg

As I asked Xavier Montero what they are doing to keep a winning streak, he simply said: “We’re just having fun. We like to compete against each other at practice so when it comes to games it’s like practice to us.”

That is what the men are doing to keep their winning streak. Their record is now 5-1 because of their dedication a 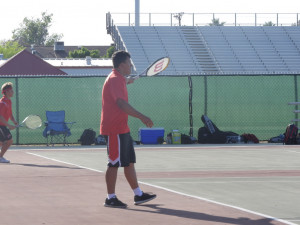 On Tuesday, March 7, The Agua Fria men’s tennis team had a match against Deer Valley and defeated them 5-4.

Tennis is a mental game, so it is all on you. There are no refs involved. If you cannot determine whether the ball was in or out, you have to come to an agreement, if there is no agreement you have to replay the point before that.

Having a strategy might help in a game or match and it might not, as I asked Xavier Montero  what his strategy was to win a match, he responded with: “Stay calm and humble and play the same whether I’m up 5-0 or down 0-5.” Deer Valley has a “solid team” and gave our the men “good matches,” Montero said.

Our men’s tennis team is now on a 5-game winning streak.

The men’s tennis team has dominated every team they have faced this season. They lost their first game to Estrella Foothills 3-6, but the men’s team has bounced back and now they are on a 5-game winning streak after their game against paradise valley.

The team beat Moon valley and Mingus union 9-0. They also beat deer valley in a close game 5-4 and they beat lake havasu 6-3. And on march 21st they beat paradise valley in another close game 5-4. They have a game on March 28th against Dysart at home so go support your men’s tennis team.