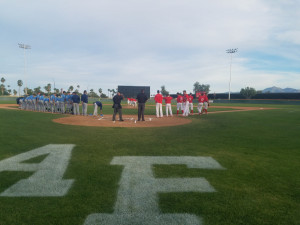 After a tough stretch of games, the Agua Fria baseball team responded with a huge 4-2 win over the top-ranked Verrado Vipers on April 20.

It was just what the varsity boys needed after another busy week of games.

The varsity boys have battled hard, but had been on a five-game losing streak. The pitching has been outstanding, but there has been errors in the field that have held the team back from many wins that were needed.

Come support your Agua Fria Varsity Owls next week in their doubleheader against Lake Havasu on April 24. #BeAnOwl