This season the Varsity men’s volleyball team has played their hearts out and fought hard in their section. But recently the varsity team has not been playing as well. The Owls fell to NFL Yet HS in four sets on April 25, bringing their record to 4-12.

In the triple header the week of April 3, they lost all of the games. Luckily this season JV has improved and they won 2 of the three games in triple header.

Varsity lost vs Peoria Panthers on April 4, Liberty Lions on Apr 5, and Raymond S. Kellis on Apr 6. On tuesday the 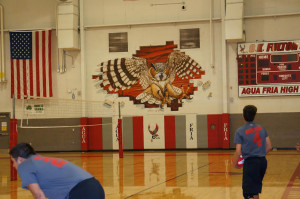 But Coach Kenneth Fox has some comments on the lost to Kellis and why they lost. “Today we played against a team with really strong hitters their hitters were getting a lot of kills in the first and second set,” Coach Fox said.

Even Though his team lost Coach Fox was still proud. “I know we lost but that is not the main thing, the main thing is that we get better every match…” he said. “But in the third set we got a lot of blocks so, always proud when we improve.”

Coach had made a comment on on adding a little depth to the Varsity team. “We are going to get our new right side reps,” he said. “He joined the team on Monday so he has one practice under his belt and he the task to play three straight games against high level competition also we have one of our defensive players back from injury.”

Coach Fox also said for the next game they will need to practice. “We’ll keep working on defensive positioning and blocking,” he said.

Coach has not forgotten about the JV team this week. “As far as the program goes, J went 2-1, so I like that JV had a solid performance this week and is showing great development, which shows the work Coach Weeg has put in this season,” Coach Fox said.

JV this season has not played that well until recently. This week they played against  Peoria Panthers on Apr 4tn they won 2-0 , Liberty Lions on Apr 5th they lost 0-2, and Raymond S. Kellis on Apr 6th they won 2-1.

The Owls play at Notre Dame Prep on April 27 to complete their season.