The Owls took the mat for the first time this season on November 22nd at home. All of the wrestlers were ready to go and show all of the other teams what true hard work and dedication looks like. The wrestlers have been practicing for nearly 2 months to get ready for the season. 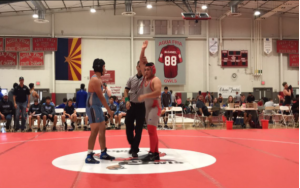 In the first match, the Owls had a very close match, but were able to escape with a 37-36 win. During the first match we faced the Cactus Cobras, and they brought some competitive talent to the mat. Al Medina, senior,  performed well and was able to defeat his opponent. Which was a strong way to kick off this meet. Plus, the other schools were able to get a glimpse of the determination in the wrestlers eyes. Cactus High School went 0-3 at this multi meet.

In the second match, the owls lost to Buckeye Union high school with the score of 24-38. Buckeye went 2-1 only losing to Barry Goldwater. Then, in the third match the Owls lost to Barry Goldwater High School 24-50. To open up the season, the owl wrestlers went 1-2 against some impressive schools.

The Owls have also recently competed in a very competitive tournament, Jerry Benson 45th annual Invitational Tournament. The wrestlers competed their hearts out in a 2 day tournament. This tournament has been around for 45 years, and it was hosted by Apache Junction. The Owls worked very hard in this tournament and did  well.

The Owls came out looking strong and aggressive, and were able to add up a couple wins. Despite not having 3 of their weight classes. The Owls wrestling coach Richmond said, “We did very well in the later rounds of the tournament. We just need to get back to practice and work on some stuff.” Now the Owls next tournament will be the Big Red Invitational tournament on December 8th-9th, so come and support your Owls!