Agua Fria’s Varsity Spirit line performed an outstanding routine at Verrado High School that led them to being qualified for state competition on November 11, 2017. They placed somewhere in the top 10 of the 24 teams, this led them to national qualifiers competition. 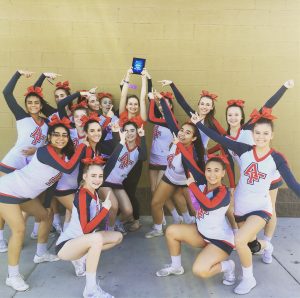 Congratulations to the lady owls for coming in 3rd place out of 9 teams during nationals qualifier! The girls competed at Estrella Foothills on November 18, 2017.

Teammates Shealeigh Harden and Kaylee Moses, both sophomore, believe that “the team worked well together and put out their best efforts, in which it really showed at both competitions.”

They overcame some big challenges during these past two competitions. Coach Victoria Jones mentioned that at state qualifier, ”they had a music issue, so they had to do their routine twice. So, they were really tired but they still performed remarkably well. Given that the team was not given any time in between doing the routines.”

However, during nationals qualifier, she is proud that the team was able to hit all of the things that they usually struggle with, even though they began struggling on things they normally do well on.

Coach Jones goal for nationals is “for the team to improve their scores by nationals, work on tumbling, and and clean up the routines.”

Harden’s and Moses’s goal for the team before nationals is to “get a high placement and hopefully make it to day two of nationals competitions. We also hope to work better as a team and get along more.”

Congratulations again to Agua Fria Varsity Spiritline for competing in another nationals qualifier competition on December 9, 2017 at Deer Valley High School. Their placement at the competition is not announced yet.