The Agua Fria Owls took the court against La Joya on Thursday, February 1st. The Owls came out strong with a very intense attitude. The varsity boys started off strong with 20 first quarter points. They did not do as well in the second quarter because they were outscored 11-20. The boys came out of halftime wanting to prove themselves, but they were not able to come out top in the third either. Although, in the fourth quarter the Owls had an 8 point deficit to start the quarter. 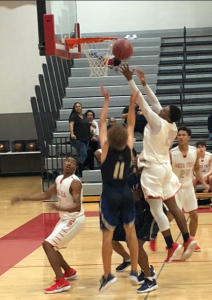 The fourth quarter did not seem that exciting, it just looked to be La Joya would come out on top by a landslide. But, in the final minute of the game, the Owls were able to go on a 10-4 run. In the finals seconds of the game guard, Daniel Foster had a chance to tie the game in the final seconds. The score was 59-60 and La Joya was up. With the last free throw in the final seconds, Daniel missed. La Joya went down the court and got fouled, they made the first one and missed the second one, Duron McNeal came up with the rebound and shot a full court shot, and unfortunately missed.

This was also the team’s senior night, and it definitely was a memorable game.The team has 8 seniors, and each one of them has worked their hearts out for the team this year. One senior in particular was Captain, Daniel Foster, who was the team’s leading scorer this year averaging 16.1 points per game. These seniors hope to pursue their basketball careers in college. This game was for the playoffs and they unfortunately lost, but another team that had the same record with us, lost and we got into the playoffs!

In the playoffs, we played Betty Fairfax and the Owls, unfortunately, lost 59-51 on February 9th at Betty Fairfax. This loss was devastating for the team because they had worked so hard to get to the playoffs. Coach Marks said, “the goal was to ultimately win the state championship, which we fell short of, but overall it did meet my expectations of making it to the state playoffs.” This was Coach Marks first year coaching the team, and they were very successful.

Now that the season is over and having 8 seniors, they look for young players to be leaders next year. When asked what the team could improve on, Coach Marks stated that “we need the guys who are coming back to have leadership and to step up, Jaden Glass, being one of those guys.” Coach Marks is excited about what next season has in store for the team. Go Owls!

Editor’s Note: The JV basketball team officially forfeited two victories this season (against Desert Edge and Verrado). The forfeits have been reported to the AIA.