Agua Fria’s Varsity Women’s soccer team ended off the season with the record of 11-9. Coaches for the team were Aaron Chaira and Katelyn Fowler. 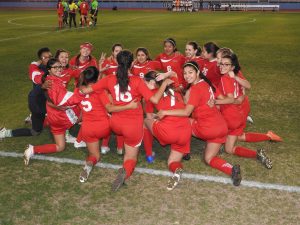 This was Coach Fowler’s first year coaching as well as teaching. According to Coach Fowler, “Coaching and teaching are always difficult, but it was all worth it in the end.”  A typical practice for the varsity players was 3:30-5. The team would first start stretching, then run about 1-2 laps with JV, and then split up. After that, Coach Fowler and Aaron taught the girls to be aggressive, and they practiced corner kicks and crossing.

The team had two freshmen playing on the team this year  were Ahnise Chaira (defense & forward) and Leslie-Ann Rodriguez (defender.)

Zalma Torres played on the varsity for two years and she has two more years to go until she is off to college. Zalma had 34 total goals this season.

After every game, had Coach Aaron would write down the mistakes the team had made, so at practice, they could practice more of what needed to be improved.

We are looking forward to the juniors and sophomores to step up as leaders to incoming freshmen. The coaches have high hopes for next year’s team to make it to a playoff game. We wish the current and upcoming players the best of luck for upcoming seasons.