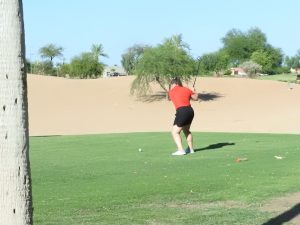 Before I get into the stats, lets explain how golf works. The main point of golf is to get the ball from the tee box (where you start) into the hole. Par is the exact number of strokes or hits it should take you for that hole and at the end it is all added up. There are also a bunch of ettiquette rules and technical rules that go along with that.

With that being said, the girls golf team has done a great job so far this season being undefeated. So far the team has gone up against Barry Goldwater, Copper Canyon, and Estrella Foothills.

In the first match, the girls went up against Barry Goldwater, though they were successful in the match, there were some mistakes that could have been prevented. Captain Hayley Baker said: “We were all nervous going into the match, you don’t know what the team will be like, if the girl you are playing against is nice, is the course in good or bad condition, if you’ll hit your clubs like you’ve been practicing, and most importantly, how hard the course is.”

The girls team consists of one senior, and three sophomores. The team captain, Hayley Baker, is happy with her teams performance so far. “I’m proud to see them all growing as golfers each day,” she said.

It is only Abriana’s 2nd year playing golf and Hayley hopes to pass the captain title to her after she leaves. “She is showing great leadership skills but also respects the people above her and those are great captain qualities” Hayley says.

The two new players on the team, Sanai Metoyer and Xitlali Nunez-Rivera, have great potential. “Golf is a very frustrating sport, and I’m happy to see that they have been able to do so well this season considering their new to the sport,” Hayley said.

Hayley hopes to see the program grow in the future after she leaves, right now she just wants to focus on the season and trying to finish just as strong as they started.