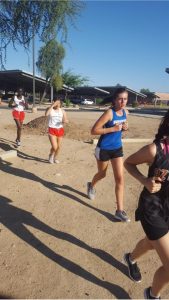 The girls varsity team has gained six new faces to the team with three returning varsity members from the previous year. A notable performance came from Junior Riley Roberts for finishing in seventh place overall in her first cross country meet as the rest of her team rounded out to finish the meet. There is a lot of potential for this team in the upcoming cross country season.

The boys varsity team, which consists of primarily seniors and freshmen, were also able to pull out a second place win due to their excellent commitment to their team work and individual skills proved to be very useful in this meet. Senior Ismael Hernandez pulled out a sixth place win with the rest of the team not far behind him.

This season with the varsity cross country team looks to be a promising one with lots of fresh faces in the crowd. “When you have a new team they have a chance to start over, a neewer group is more likely to respond to starting fresh so most of the new athlete welcomed the change,” Coach Haubenstricker said. He feels that he has a state-qualifying team in the making.

The boys commitment to their sport even in the offseason has helped them improve drastically in their running and placement on the team.

Times are very important to the runners and amazingly we have our Owls already topping their personal bests from the previous year to start out this already very successful season. Coach Haubenstricker hopes that the team continues to put in this effort through the season to be able to have his athletes in the best running condition they can be and fine tune their talents.

These runners have their eyes set on improving themselves before awards. When they run, they do it to improve on themselves, not to necessarily get the trophy at the end of the race although it is a great reward to represent their commitment to the team and themselves even if they are in doubt.

“I feel like it’s getting easier,” senior Jennifer Lopez said. “I’m finally improving and I am able to run more miles…your teammates cheer you on and push you to get better.”

We look forward to see what our cross country team has in store for Agua Fria High School in this new season. We wish them the best of luck on their future endeavors.