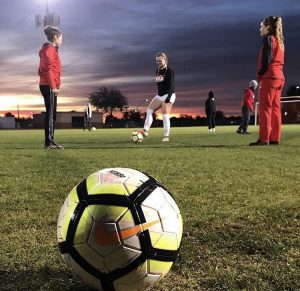 Kaylie and Natalie have known each other since they were little kids. The two started in dance and eventually moved over to soccer. They have been playing with each other for their entire soccer career with exception of one or two seasons.

They both chose to do club around the age of 12. Being best friends helps them on the field. “We have known each other so long and we can read each other well so we know when to help out and when to back off,”  Kaylie said.

Kaylie is specifically excited for Senior year. She was especially excited for a tradition that they call Candy Cane Golf. “We all dress up and the goal is to kick a soccer ball through obstacles like you would in mini golf, then we have a potluck after,” she said. Kaylie is excited for her senior year and happy that she could leave her mark as team captain.

Natalie Steinman, unlike the rest, is in her second year of being team captain. She was excited to crush Paradise Valley, Betty Fairfax, and Raymond S. Kellis this year.

This season, Espi said, “I was most excited for senior night, even though we played Millennium.” Espi’s advice to players and future players is to “show what you got and don’t let the fear bring you down.”

Lastly there is Selena Garza. Her reason for playing soccer is because her family got her into it, she started playing club at age 6.  She was most excited for Candy Cane golf. Her biggest pet peeve is when “people don’t listen to you, especially when you are only trying to help them.”

The girls fought and played a great season with their record being 7-6-1.