After a 4-0 start, the Varsity Owls football team broke its undefeated streak, losing its first game to Sunnyslope 41-14.

The team started off slow with multiple injuries in the first quarter, but gained some confidence scoring two touchdowns in the second quarter.

The Owls had a hard time keeping up with Sunnyslope’s offense but fought hard throughout the whole game. 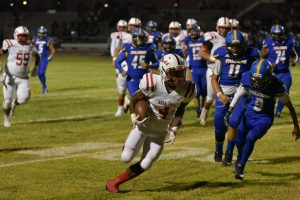 Earlier in September the team had back to back wins against Carl Hayden and Sierra Linda. The boys were ready and felt confident, hoping they would win. Junior linebacker Angel Martinez said, “We’re ready for whoever. I’m excited, we’re going to be really good.”

Tre Lewis, starting quarterback, said before the Carl Hayden game, “Not to sound cocky but we knew we were more prepared than them.” Even Angel Martinez was excited, he said that “playing on another field was going to be interesting. I knew both sides of the ball were ready to dominate.”

The boys had a great crowd encouraging them, waiting for another win.

The Owls had a great start with Anthony Crummett’s catch from Tre Lewis 19-yard pass, securing them their first touchdown of the game. However, Carl Hayden blocked the extra point kick.

Later in the first quarter, the Owls made another touchdown thanks to Trey McArthur Osborne.

In the 2nd quarter, Angel Martinez recovered Carl Hayden’s fumble and made a run for the endzone. Then another fumble from Carl Hayden came afterward. Later in the 2nd, the boys gained another touchdown from Nicolas Murguia who caught Tre Lewis’ 28-yard throw.

Junior QB Tristen Sanchez-Clark made a marvelous run in the 3rd quarter. Carl Hayden was able to score with a run and score another with a touchdown, keeping the Owls in the lead.

But that didn’t stop the Owls. Jalen Williams-Fuller powered through with a nice touchdown run.

The game ended 58-13, with another excellent win for our Owls, leaving our coaches, fans, and everyone thrilled.

The next week, fireworks and all, the Owls defeated Sierra Linda 64-14 for the Homecoming football game. With the stands full, the team was determined to take them down.

The 1st quarter started off slow for the Owls, as Sierra Linda scored the first touchdown. But that didn’t stop the Owls as they used it as fuel to keep going.

Soon after, a 40-yard touchdown pass came from Tre Lewis to Trey Osborn, putting the Owls in the game.

In the 2nd quarter a punt return from Nicholas Murguia keeping the Owls in the lead 17-8. Later in the 2nd quarter, the Owls added a 53-yard touchdown pass to Carter Weeg. “Defense played lights out and the offense all contributed to scoring,” said Carter Weeg, keeping his teammates hyped and the crowd on their toes.

The defense stopped Sierra Linda for the rest of the game and the offense did its magic.

With some amazing plays throughout the game, the Owls ended the night with victory 64-14.

Come support the Owls this Friday for the pink out game at Verrado High School!